On the 25th February 2019, we began the day at 7:45am, partaking in a long drive to Corkscrew Swamp. Again, proceeding to coat ourselves in sun-cream and (greatly needed) bug spray whilst happily blasting our new favourite American radio station – Bob fm.

Corkscrew sanctuary became a National Natural Landmark in March 1964, and then the wetland area became designated to the swamp in 1888.

Corkscrew became a sanctuary dating back to 1954, made up of a grand total of 13,000 acres. The attraction relies solely on donations and funding to maintain it. The swamp is filled with abundance’s of wildlife, including bird, mammal and reptile species, aswell as nature and the most passionate volunteers. The swamp truly was a spectacular place. The main aims of the swamp is to protect bald and pond cypress strands.

Sharon (a volunteer at the swamp) soon informed us about a scheme carried out in the swamp. Underprivileged children come and visit the swamp to learn more about the way it runs and about the animals inhabiting it, meaning they can then bring their parents (or another loved one) to the swamp for free to excitingly teach them about it too!

Figure 30: The welcome sign situated at Corkscrew Swamp upon accessing the entrance area.

Shortly upon arriving at the swamp, we were divided into 2 groups in order to easily manoeuvre around the tranquil location. Before heading out, we were shown 3 large scale maps which issued us with details and knowledge about human to bird populations over the years.

And, noticeably, with an increase in Human population and more settlement demands meant an unfortunate decrease in bird populations over time.

Figure 31: Tall Cypress trees photographed as we walked through the beautiful cypress forest.

The two distinctive types of Cypress trees are bald and pond.

Figure 32: Lengthy Cypress Strand Forest in distance of the boardwalk.

In 1955, the boardwalk was created consisting of approximately 2.25 miles which accommodate a peaceful walk through 5 different habitats.

Upon walking amongst the lengthy boardwalk, which stands at roughly 19 feet above sea level, accompanied with terrific wildlife sightings, we were given information regarding the second World War, such as there being a significant amount of timber being cleared following the War. And, additionally, this created a large lumber cutting boom which resulted in it being sent to Europe.

2 years ago (2017) parts of the boardwalk were dismally ruined as a result of Hurricane Irma because bald cypress trees were knocked down due to the heavy forces implemented upon them. This meant that some parts of the sanctuary were closed to the public during our visit whilst undergoing repair maintenance, however, they are soon to be scheduled for reopening. 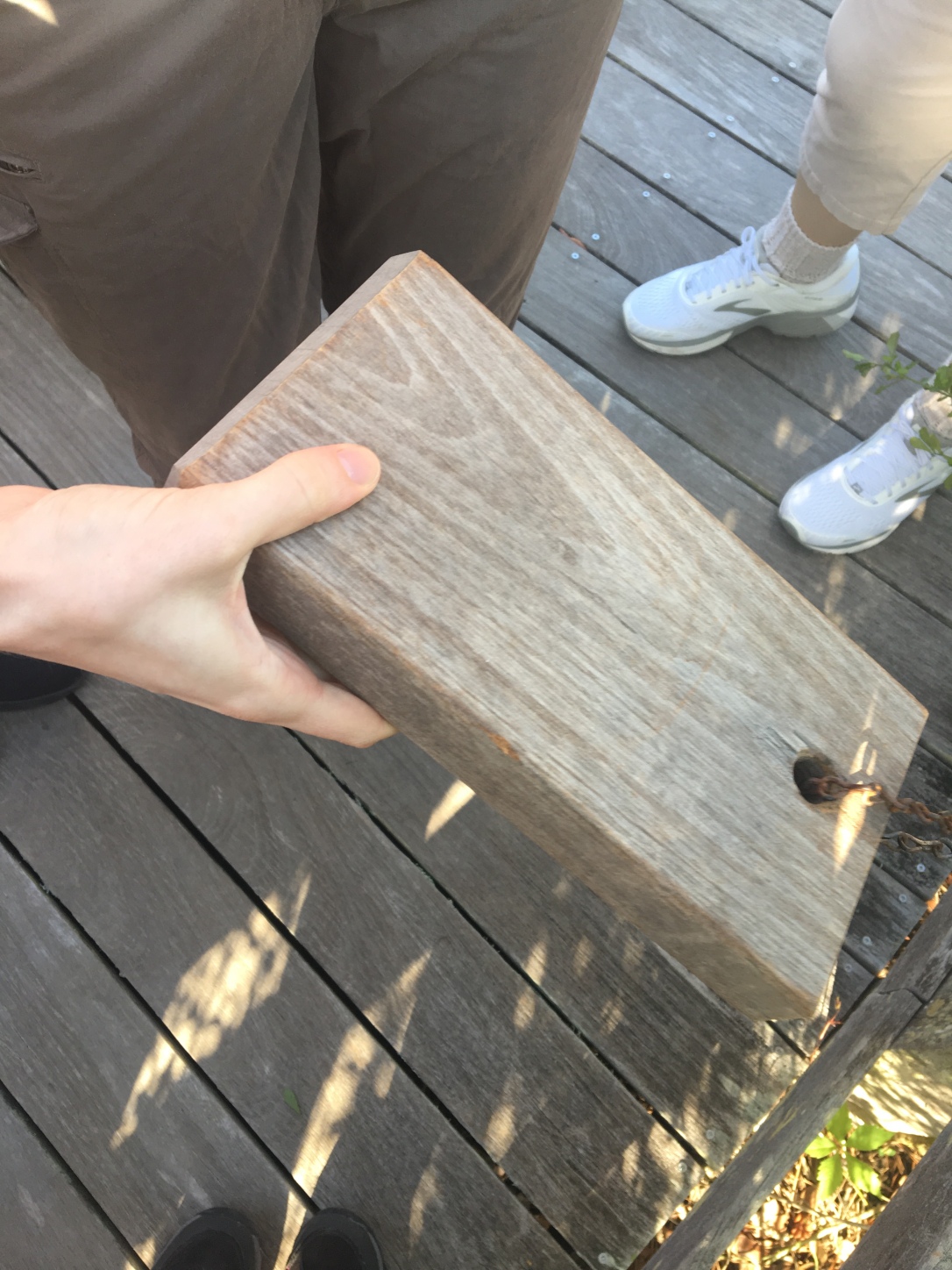 Figure 33: A single, ponderous boardwalk slate chained to the nearby fence to demonstrate the high weight of the boardwalk and the hard work put into creating it.

Some species have adapted to withstand fires with the aid of their extensive root systems, which can act low with fast manoeuvrability. They are known to be common disasters throughout Florida as a result of lightening strikes. Therefore, they lose limbs as they grow.

Palm trees: A species grown in the tropics, also referred to as sable palms, which hearts of palm are made from. Sable palms act as a host food for butterflies. Palm trees can grow up to 197 feet tall and there are over 2,500 species.

The swamp helps to assist the survival of a range of species, including Floridan Black Bears (Ursus americanus floridanus) by planting berries in order to attract them and to maintain, not only their their survival, but to provide a mental and physical stimulation to the species by encouraging active foraging behaviours. Woefully, the berries also have the tendencies to attract poachers since the berries gathered can be sold for a considerable amount of money, and the murdleberries can also be used to make scented candles. Which, again, creates a reliable (though highly unfortunate) income to poachers.

Areas of the swamp are burnt every 3-5 years in order to promote the removal of invasive species. Creating fires also allows some plant species to thrive, as they require fire in order to grow, with some species only appearing to bloom after exposure to fire but reaching their mortality rate at just 3 mere weeks. 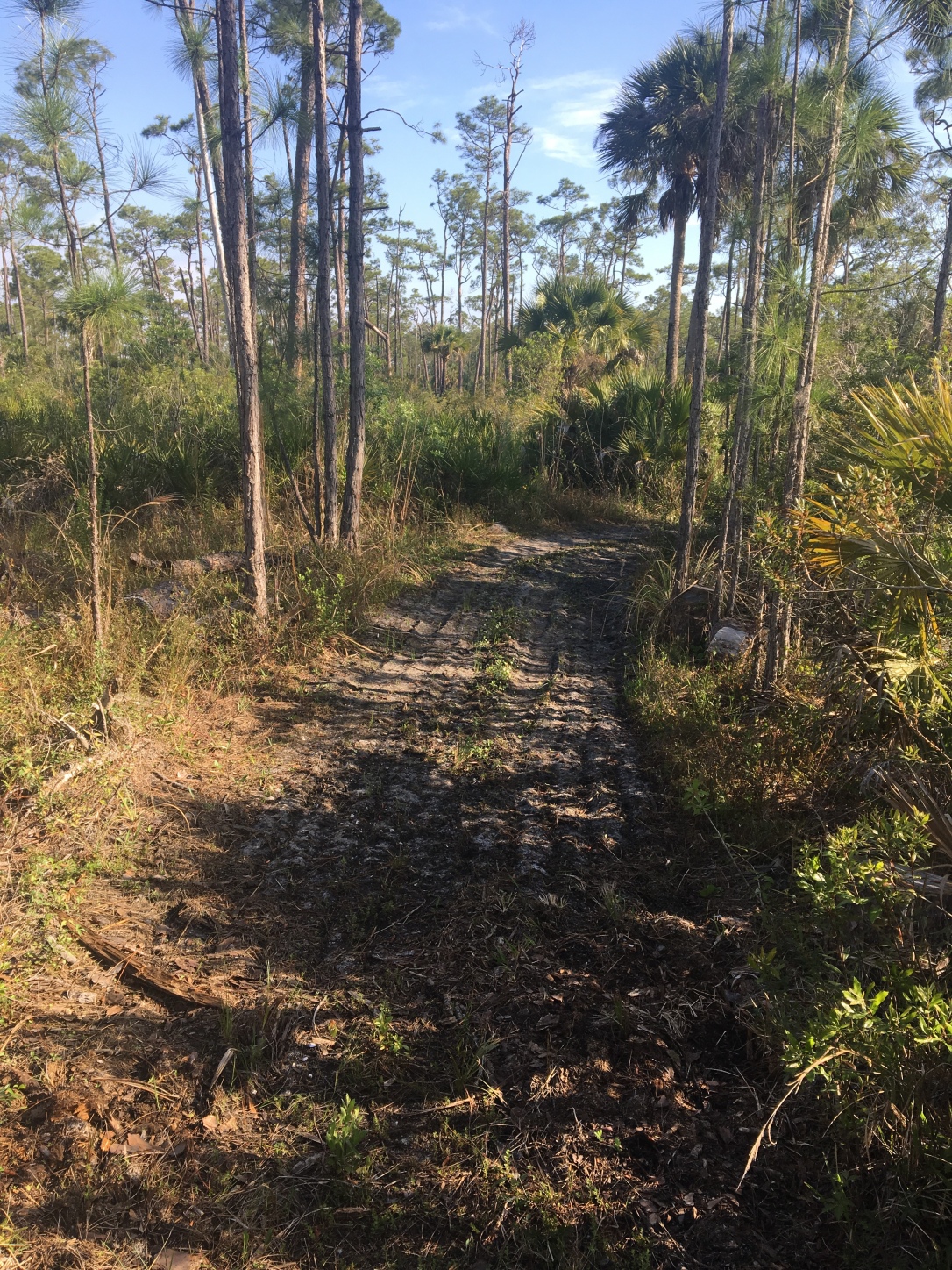 Figure 35: An area at the sanctuary which gets ploughed, with 28 fire breaks in total to prevent fires from spreading.

The two species we all mutually witnessed during our swamp visits were highly flying vultures, which are grouped into 2 different species:

Turkey vultures are typically driven out by their counterpart, black vultures and can be recognised by their ‘v’ shape and because they possess longer wings in comparison to black vultures. This species are known for eating dead prey items, which they will regurgitate when threatened, since they have weak feet and simply cannot rip, lift or carry heavy carcasses.

Black vultures are distinguishable due to the features on their wings, including a rounded circle alongside a short tail.

After our visit to Corkscrew Swamp, we visited a nearby location with the task of spotting micro plastics amongst the mangroves. Micro plastics are minuscule fragments of plastic that serve obstructive effects on our environment, contributing to the deaths of marine animals aswell as standing as inductors that pollute the oceans.

Primary micro plastics can be obtained from sanitary products, microfibres and pre-production pellets.

Further information on micro plastics can be found through the following resource:

SPECIES OF THE DAY:

Some of the species spotted on the day of 25th February 2019 include: 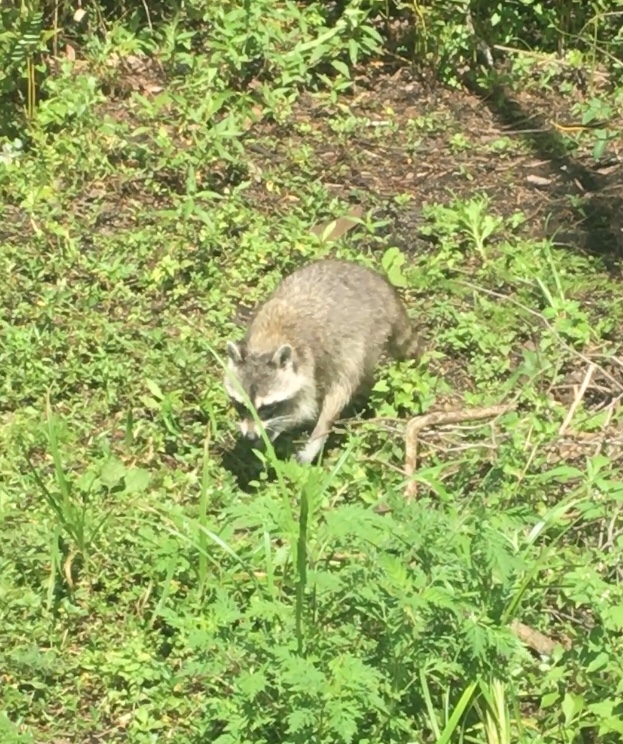 Raccoons are small mammals native to North America, with an increasing population the status of this species is currently rated as ‘Least concern’.

Green anoles are a native species to Florida, although outnumbered by the invasive brown anole. The species are native to areas in the Southeastern United States. 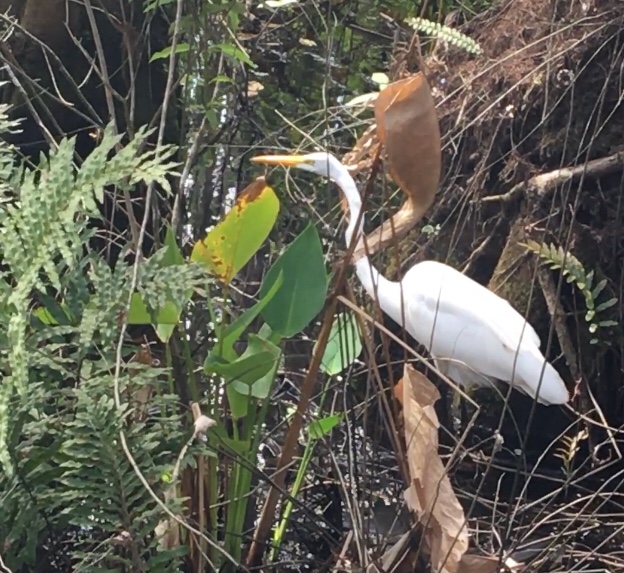 Great Egrets are a widely distributed species throughout Asia, America and Southern Europe. They resemble the appearance of small egrets, but are considerably larger in comparison. 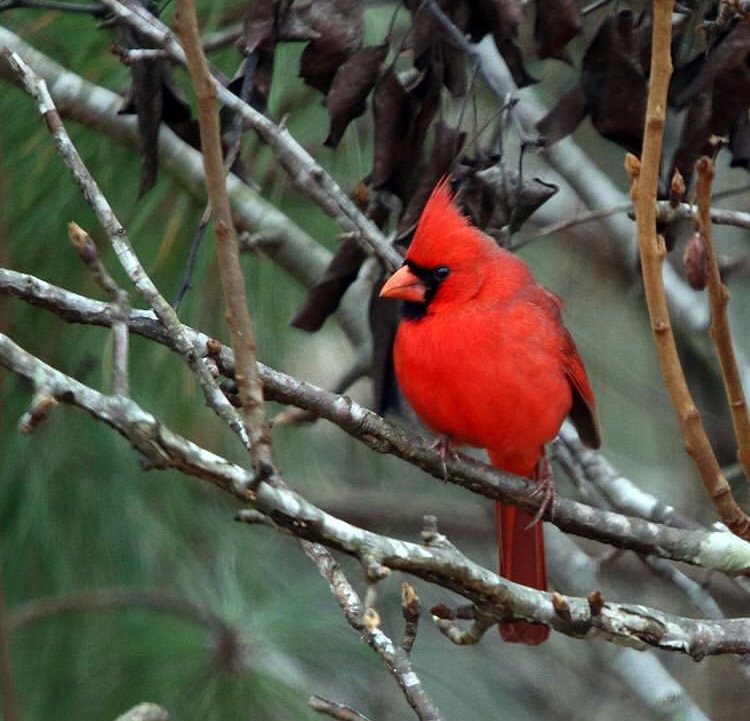 The cardinal bird is also referred to as the common cardinal. The species (which occupy more than 10) can be found in habitats around Southern Canada and Eastern United States.

Manatees are large, aquatic mammals thriving upon a herbivorous diet. The species live in warm coastal waters, since they have a low metabolic rate and minimal blubber to keep them warm.

Brown anoles are a species of lizard with preference for open, vegetated sites native to Cuba and The Bahamas. They are known to feed on small arthropods, alongside their moulted skin and detached tails.

The number of brown anoles in Florida currently outweighs the number of green anoles, despite being an invasive species. 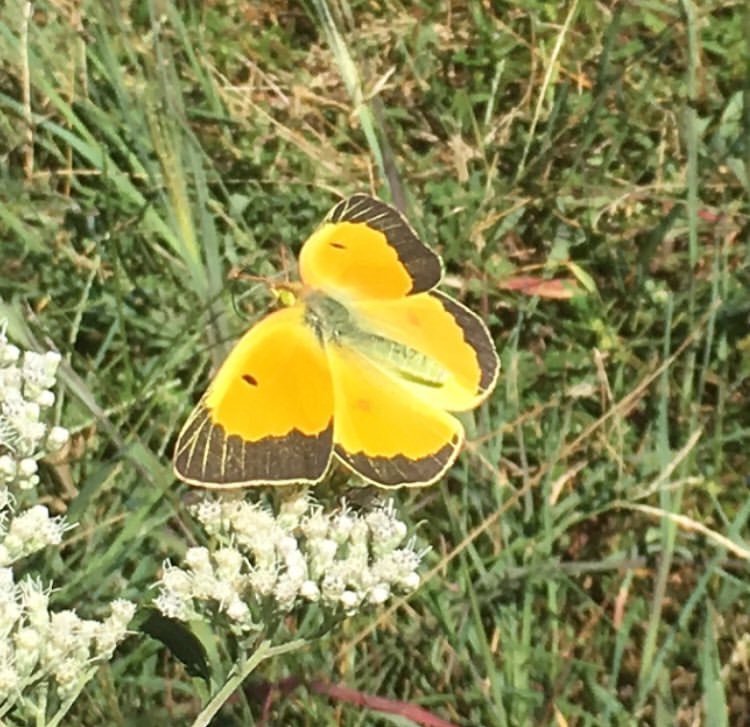 Orange barred butterflies are found inhabiting areas of South America and the Caribbean. The species live in open habitats including urban and disturbed areas. 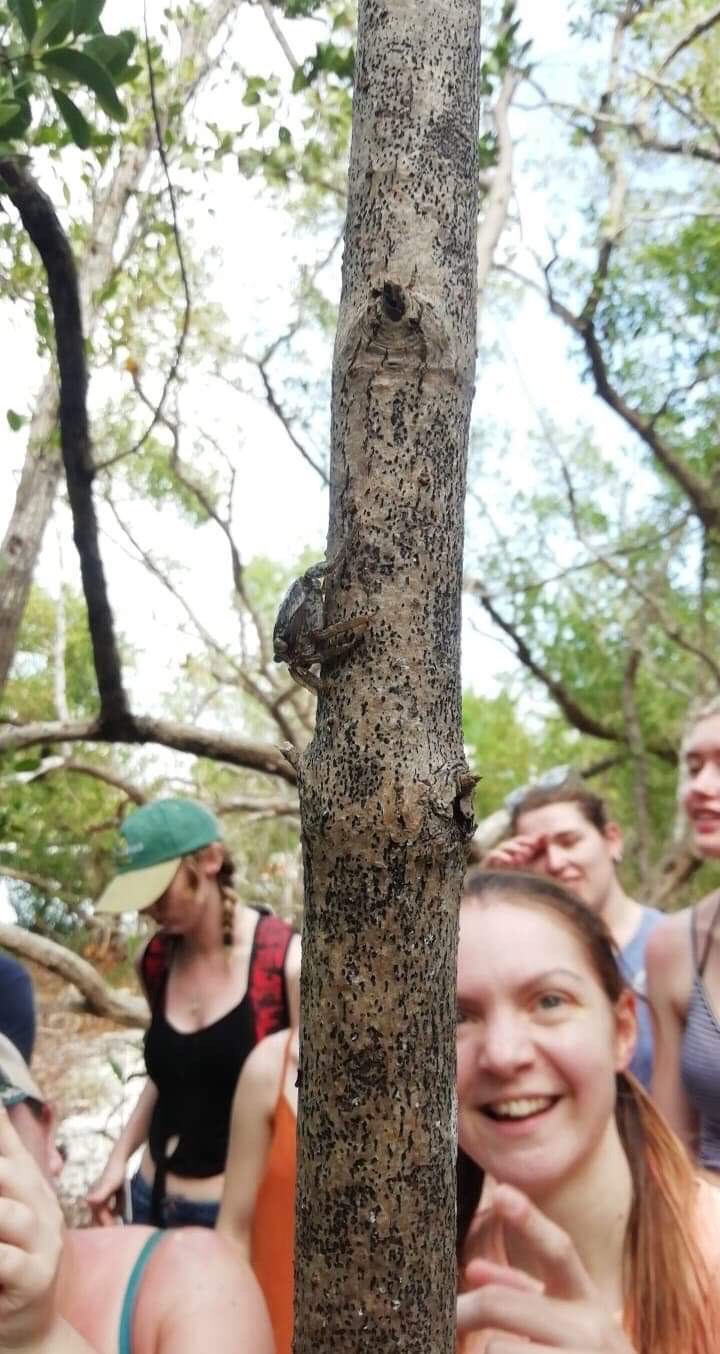 Mangrove crabs play a vital role in the ecosystem for other species and have the ability to climb trees to protect themselves from predatory threats.

The painted bunting is a member of the Cardinal family with a conservation status of ‘near threatened’ due to a declining population.

For further information on The Corkscrew Swamp Sanctuary, please visit the following source: 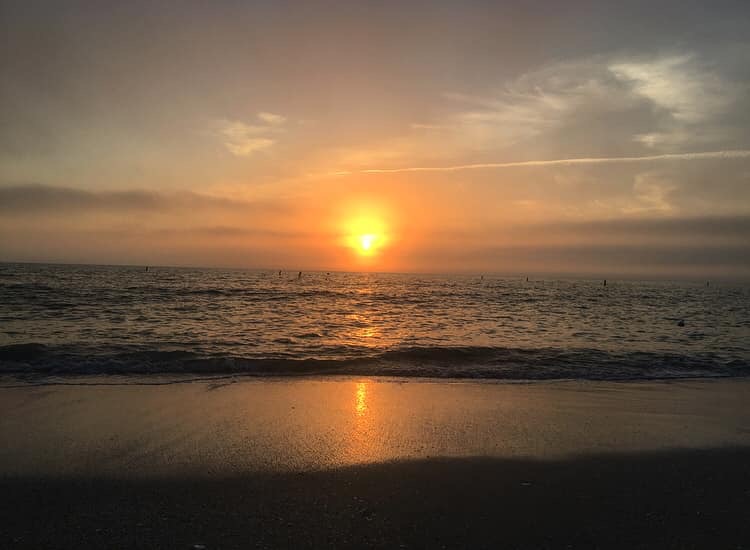